All good things must come to an end, but as we hit the magic number of 26 top cycling highlights of the Peak District borders around Derbyshire, Cheshire and Greater Manchester there’s still plenty of possibilities ahead for this year and beyond…

T is for… Turf Lea

Turf Lea is perhaps the most stunning spot along the Upper Peak Forest Canal – you didn’t think I’d leave that one out did you? Between Marple and Disley is one of the most beautiful stretches of waterway on the entire network, where the views open out to show you the valley twisting away into the distance towards the Swizzels sweet factory and the canal clinging to its side.

The whole canal is also a rare and essential traffic-free gateway to the hills for walking and cycling, avoiding the busy B6101 Strines Road below or the A6.

Who says hills always have to be green? In Stockport‘s rekindled Old Town, they’re lined with beautiful red brick, dotted with fascinating buildings, home to a burgeoning independent dining and shopping scene… and ideal for cycling.

V is for… Vale House

If you’ve heard of Vale House at all, it’ll be as Valehouse Reservoir, where a mill estate in the Etherow valley was swallowed up by the enormous chain of reservoirs along Longdendale.

Leaving Hadfield, the Trans-Pennine Trail now climbs out along the dramatic former Woodhead electric mainline here, making for one of the most rewarding off-road cycle trails in the area.

Nestled between Macclesfield Forest and the Cat & Fiddle is the most miraculous lane for cycling, gently meandering back and forth over a brook with almost the feel of a miniature Lake District pass but very much on the Cheshire edge of the Peak.

The road through Wildboarclough is on the Cheshire Cycleway loop around Macclesfield, a challenge absolutely worth taking on. The only problem? The hills to get out again!

X is for… Taxal

Taxal offers not just a rare ‘X’ around the Peak District but an exhilarating series of off-the-beaten-track byways and bridleways, giving an alternative route to the Upper Goyt Valley. The ford near St James’ Church, on a fun bumpy byway across from the top of the Shallcross Incline, is a beautiful spot to stop.

Y is for… Wybersley Road

Wybersley Road (also kind of a Y, right?) along The Ridge between High Lane and Marple is just one quiet lane offering a roller coaster ride of wonderful views to both country and town. Maybe it’s your ideal route out or back from longer rides, or a pleasant enough destination if it’s own.

Stopping atop The Ridge, you can see Cobden Edge and Kinder Scout to one side and the Cheshire plains and towers of Manchester the other. This is where the Peak District really begins, if not officially.

Z is for… bZzzz Bee Network

Hear that buzz? 2021 is the year when the Bee Network finally, finally makes itself known on the ground with several new Greater Manchester cycle schemes. In the south east, Stockport’s first major 2-way cycle track, from the A6 to Bramhall Park. Could it finally convince the borough to invest in more elsewhere, like the A6 itself?

Here’s to the possibilities, improvements and adventures to come!

I hope you’ve enjoyed this Peaks & Puddles A to Z, let me know on Twitter if this inspired you to ride somewhere new!

It’s a teaser not just of the excellent cycling around these parts but of what’s to come here on the website itself — routes, photos, tips, histories and more… ready to start exploring…?

Please consider chipping in the price of a coffee to help pay the bills and support my work, ensuring this resource remains here and free to access for everyone. It only takes a couple of clicks. 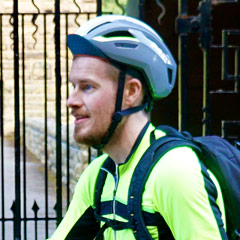 Hey, I'm Anthony! I started Peaks & Puddles to chart the ups and downs of cycling and walking the edges of the Peak District around Buxton, Macclesfield and Stockport, with the dream of a future where bikes and boots are a normal, safe choice for everyday journeys and exploring between town and country. Find out more about me and Peaks & Puddles here.

Support Peaks & Puddles for the price of a coffee